Aggressive marketing has been the cornerstone for the major leap in the expansion and growth of Sierra Leone’s premier bank, the Rokel Commercial Bank. The quest to expand its market share has caused almost every category of staff including top management traversing the length and breadth and of the country to engage and woo potential customers.

A management team led by the Managing Director, Walton Dayoh Gilpin and Deputy Managing Director, Emmanuel Borbor was in the Sierra Leone/Guinea border town of Kambia  to witness the formalization of mining agreements between Supreme Minerals, a Bauxite mining company and stakeholders of Kambia District.

Residents have described the move by Sierra Leone’s fastest growing bank as reassuring and timely since dependable banking services in that part of the country has been difficult to come by over the years irrespective of the huge commercial activities in the district.

Rokel Commercial Bank will not only become the major banker for Supreme Minerals but will also seek to establish itself firmly in Kambia and its environs as well as determine other banking requirements for the company.

The involvement of the bank in such an operation has been labelled as another giant step towards promoting economic activities in the District. Consequently, the move is clearly an indication of the bank’s resolve to remain the undisputed champion for financial inclusion in Sierra Leone.

“ Push yourself because no one else is going to do it for you, People of  Kambia are now ready to push together with Supreme Minerals and RCbank.” remarked RCbank Managing Director, Dr Dayo Gilpin.  The Deputy Managing Director, Emmanuel Borbor, also assured the people of Kambia of Government’s commitment to improve their livelihoods through meaningful and sustainable financial interventions in the district.

The ceremony in Kambia attracted a galaxy of notable personalities including the Paramount Chief, PC Bai Farma Tas Bubu Ngbak, officials from the National Minerals Agency, the Member of Parliament for the area, section chiefs and Rokel Commercial Bank Staff. 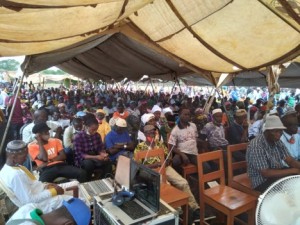 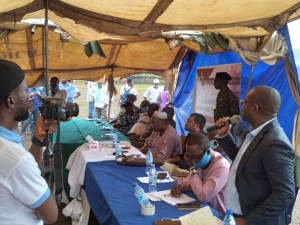