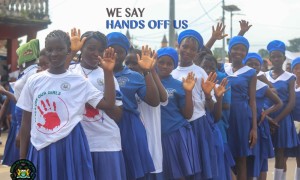 In her determination to take her flagship program countrywide, Her Excellency the First Lady of Sierra Leone, Madam Fatima Maada Bio, continued the creation of awareness of “Girls being girls not  mothers or sexual slave s” on Saturday, 12th October, 2019 when she launched the “Hands Off Girls Campaign” in Koidu city, Kono District, Eastern Sierra Leone.

In attendance were eminent stakeholders of Kono District including the Mayor of Kono District, His Worship Matthew Komba Sam, Professor Kpakima, Minister of Higher Education, Hon. Rebecca Kamara, Paramount Chief Paul Garba Saquee and a host of many others.

Welcoming the First Lady and entourage to Kono District on behalf of her constituents, Honourable Rebecca Kamara said the people of Kono appreciated Madam Bio’s initiative on the campaign against sexual penetration, rape and torture that the girl child has faced for a long period in Kono.

“Finally, the Hands Off Our Girls Campaign will take full force in our beloved district. For too long our girls have been used and abused by our inconsiderable men and it’s about time we fight together and put this menace to rest,” she maintained.

The Minister of Higher and Tertiary Education, Professor Kpakima, spoke on the aspect of education as the recipe for girl child. He applauded the First Lady for her courage in inspiring the fight to promote the girl child through education and also discouraging any form of outrage directed towards the girl child by men and boys through sexually penetrating them, stating that it is the main cause for teenage pregnancy and dropping out of school.

He reiterated that the Government is committed to creating an enabling environment for children to be well catered for through the free quality education programme.

“We should give helping hands to girls so that they can get access to education and not to destroy their future”, he admonished.
In her keynote address, the First Lady, Madam Fatima Bio commended the people of Kono for gracing the program despite the fact that it was raining.

She jokingly said perpetrators of the rape and other sexual abuses may be feeling happy to see the downpour praying that such will put the launching programme to a halt.

She pointed out that being born in Kono District it is always an emotional moment for her in trying to give back to that land.
“Today, I have come to discuss something very important with all the women in the district, which is also equally important to all level headed and reasonable men in the district,” she said.

The First Lady added that the name of some good men in the district may have been tarnished by the evil perpetrators highlighting how she is quite aware that Kono District still has respectable and noble men.

“I am here today to officially launch the Hands Off Our Girls Campaign, this campaign as I have always mentioned is not a campaign by me alone, but it is the people’s campaign,” she noted.
“I am officially also handing over this campaign to our respectable paramount chiefs and the humble wives of Kono, those whom I believe are all first ladies from the district,” she posited.

Madam Fatima Bio expressed with dismay how so many girls have suffered the “abnormal behaviour” of men which has resulted to the untimely death of unfortunate girls around the country.

“Our girls are dying every day and it’s no secret, Sierra Leone is the nation with the highest mortality rate not just in Africa, but the whole world”, she lamented.

Madam Fatima Bio furthered that due to negligence on the side of the parents and community stakeholders, the same wrong thing is seen repeatedly often where girls at young age are impregnated and at the end die during labour.

The First Lady also disclosed that in as much as Kono District is known for its religious tolerance, it is also the district with the highest number of rape cases reported per year. “We must not condone or accept these people in our society; people who are staining the name of our district and destroying the future of our children”, she defiantly said.

The Hands Off Our Girls Campaign was launched less than a year ago by Her Excellency Fatima Bio which is aimed at putting a stop to rape, sexual penetration, sexual related violence amongst others.
Kono District is the second district in as many days to get the awareness of the Hands Off Our Girls Campaign behind Bombali District in the north where the First Lady also launched the initiative on Friday, 11th October, 2019.