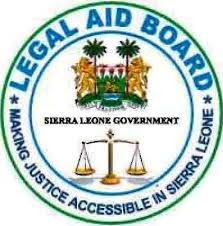 ‘You may not be fortunate to receive free legal representation from us should you reoffend because there are thousands out there waiting for our services,’ she warned. She reminded the clients that their discharge has coincided with the passage of a tough law on sexual offences, the Sexual Offences Amendment Act, 2019 which stipulate stiff penalties such as life imprisonment for rape and sexual penetration of a child.

The Legal Aid Board secured the discharge of the 14 accused persons at the Special Criminal Session (Prison Court) on Friday, 20 September 2019. Their ages range from 22 to 43. Also, the offences for which they were held range from Fraudulent Conversion to Motor Manslaughter.

Legal Aid Counsel, Mrs. Nicky Spenser-Coker had prayed the court to discharge the 14 accused persons for want of prosecution if the state could not show cause for which they were being held. The request follows habeas corpus applications which were granted by Justice Alusine Sesay after the state failed to justify their continued detention.

The Special Criminal Session (Prison Court) came about after the Chief Justice of the Republic of Sierra Leone Justice Desmond Babatunde Edwards requested the Sierra Leone Correctional Service to produce a list of inmates without indictments and therefore will not be brought before the ongoing Criminal Call Over.

The 158 inmates on the list produced by the Correctional Center were consequently issued with indictments by the Law Officers Department.   50 accused persons were represented by the Legal Aid Board from the inception of the session on September 17 to September 20, 2019. The accused persons were distributed among the Legal Aid Board Counsels who filed Habeas corpus applications on behalf of each for the state to explain why they were being held.

The Executive Director of the Legal Aid Board, Ms. Fatmata Claire Carlton-Hanciles has extolled the strong leadership of the Chief Justice in ensuring the accused persons have their day in court. ‘This wouldn’t have been possible without the leadership of the Chief Justice,’ she said, adding ‘These were cases he inherited, but we cannot continue to keep them in detention in flagrant disregard of their human rights regardless of the prejudices people may have about them.’