During  the 2020 ‘Investing in Africa Mining Indaba’ hosted by South Africa the Sierra Leone delegation was very active to showcase the country’s mineral potentials to a global audience, and prove to mining industry leaders and investors that Sierra Leone is ready for business.

The event was the world’s largest mining investment conference, dedicated to the capitalisation and development of mining in Africa.

For the first time in the 25-year history of what is undoubtedly the most important gathering on mining in the world, Sierra Leone fully participated at all levels of the event, including setting up of a country-stand, a country case-study session, a networking cocktail, a ministerial panel discussion, and bilateral meetings on the side-lines.

The above was made possible by the dynamic and transformative leadership of Julius Daniel Mattai, the Director General of the NMA and his team. It was indeed a great opportunity to rebrand Sierra Leone, highlight the major investment opportunities in the country’s mining sector and inform a global audience that Sierra Leone is ready for business.

On the opening day of the event the President of Sierra Leone, his Excellency Julius Maada Bio delivered a keynote address, highlighting the country’s fiscal reforms, legal and regulatory issues, infrastructure and technology as well as the future mining labour force. He spoke of how Sierra Leone plans to strengthen public financial management systems and multilateral institutions to make the economy more resilient through diversification.

Stating that Sierra Leone is a free market, which values  the private sector investment, the President shared his goal of reviewing and harmonising all laws and regulations relating to mining, with a view to removing regulatory duplications and inconsistencies by increasing transparency and predictability, which time and again have proven crucial to attracting investment into a nation. He ended his speech by promising “transparent administration of the sector – a consolidated and simplified minerals policy that eliminates clutter and inconsistencies”.

As well as laying out his vision for SL’s mining future, Pres Bio shared some of his thoughts on the future of the mining industry in general, commenting on the increased use of artificial intelligence and block- chain technologies such as the current use of blockchain by Tracer to track the entire diamond supply chain. The President’s statement was met with appreciation by the audience.

President Bio also held series of successful meetings with government representatives, mining industry leaders and investors on the side-lines of the Indaba. His discussion with Jeffrey Thamsanqa Radebe, a senior adviser to President Cyril Ramaphosa, concluded with plans for about 30 South African investors to visit Sierra Leone to explore investment opportunities in mining, energy and other sectors.

The Indaba also featured a country-case study on Sierra Leone, during which, the Director of Geological Survey at the NMA, Prince Cuffey, and a lead consultant from Reid Geophysics, Tim Archer, made a presentation that highlighted the geology and mineral potential of Sierra Leone. They assured the audience that data from the geophysical survey will soon be interpreted and made available to interested parties.

Speaking during a live interview on CNBC, the Director General of the NMA, Julius Mattai, informed the world that Sierra Leone has completed a countrywide airborne geophysical survey as the first step to providing high-quality geological data to investors, thereby reducing cost and time spent on exploration. He further stated that Sierra Leone is pursuing series of reforms to attract investment, while at the same time taking steps to ensure that Sierra Leoneans derive maximum benefits from our mineral wealth.

Media coverage of Sierra Leone’s participation at the Indaba was extensive, including live broadcast of some of the activities. As Amy Neville noted in the 4th February edition of the African Mining Indaba ‘Daily News’, “we were left with the distinct impression that the future looks bright for the economic growth and development of Sierra Leone.” 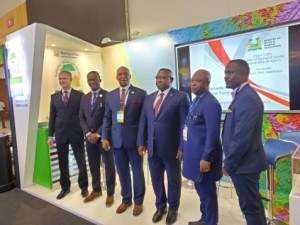 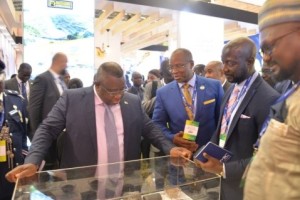