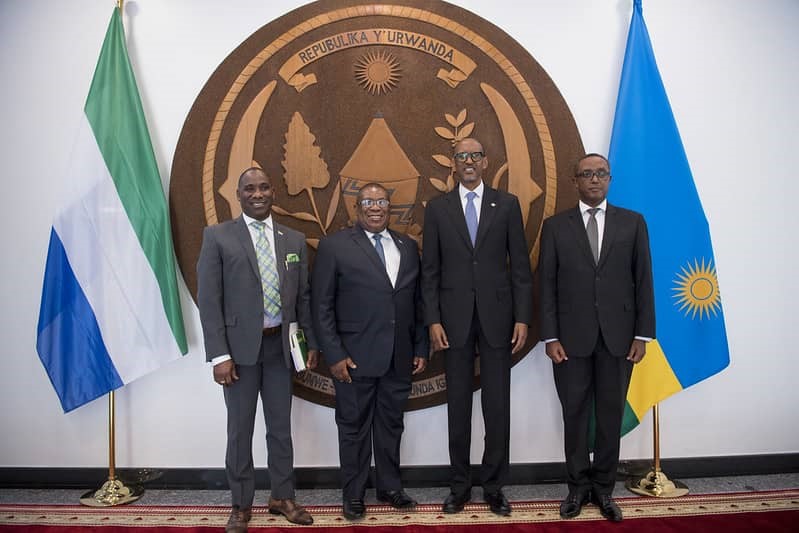 On 29 January 2020 the President of the Republic of Rwanda, His Excellency Paul Kagame received a letter of credence from the newly accredited Non-Resident High Commissioner of Sierra Leone to his country, His Excellency Peter Joseph Francis.

Whilst presenting his letter of credence to President Paul Kagame at State House in Kigali, the High Commissioner accredited to Rwanda, H.E. Peter Joseph Francis noted with honour and privilege that Rwanda and Sierra Leone share common values and aspirations and also collaborate on multi-faceted global issues. He also acknowledged the importance of Sierra Leone and Rwanda sharing membership of the Africa Union and in particular, the reform of the UN Security Council as contained in the Ezulwini Consensus and the Sirte Declaration.

In addition, H.E. Peter Joseph Francis noted the recent signing of several Memoranda of Understanding (MOUs) and Agreements during the State visit on 4th July 2019 by H.E. Julius Maada Bio, President of Republic of Sierra Leone to the Republic of Rwanda. He noted that the visit by President Bio to Rwanda was key in cementing the already existing cordial and bilateral relations between the two countries, adding that the move “opened up for more cooperation between the two countries in various sectors of their economies.”

Consequently, H.E. Peter Joseph Francis confirmed that Sierra Leone has put all legislative and legal measures in place to actualise the implementation of the said MOUs, Agreements and for the establishment of a Joint Commission of Cooperation (JCC).

Ambassador Francis also took the opportunity to thank President Kagame for his relentless role as President of Rwanda in personally going to visit at the Kigali hospital the Sierra Leonean Members of Parliament who were last year involved in a road accident whilst on official trip in Rwanda.

Responding to the Sierra Leone High Commissioner, President Kagame said he was very happy to have a very close relationship with President Julius Maada Bio of Sierra Leone, noting that he is craving for an invitation from President Bio for him (Kagame) to pay an official visit to Sierra Leone.

Furthermore, following the presentation of the letter of  credence by H.E. Peter Joseph Francis to President Paul Kagame, the Minister Plenipotentiary at the Sierra Leone High Commission in Nairobi, Abdul Karim Kargbo who accompanied the High Commissioner to Kigali, were invited to the Annual Diplomatic Luncheon, hosted by the President at the Raddisson Blu Hotel in Kigali.