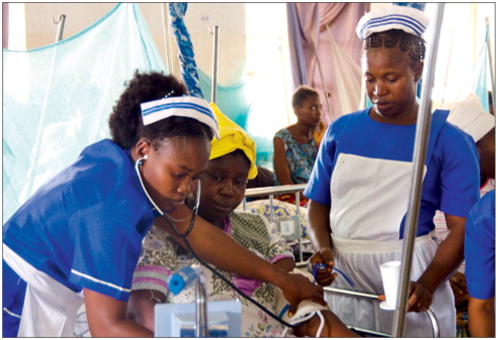 Report by; Farid Kefel, for the Calabash Newspaper

The health system in Sierra Leone can be routinely characterized as a space of failure. This became especially evident during the Ebola outbreak and the Covid pandemic when the tragic inability of public health facilities and hospitals to diagnose, isolate or care for patients or to protect health workers was widely reported in global media, often via tragic images and sensationalizing descriptions of suffering. An important barrier to accessing health services is the cost of services and the inability of the population to financially access services. To address financial inaccessibility the Free Healthcare Initiative was introduced in 2010 to abolish user fees for all pregnant and lactating women and under-five children.

The Sierra Leonean health system faces challenges due to chronic underfunding, a heavy disease burden, vastly insufficient numbers, and skewed distribution of skilled Human Resources for Health (HRH). Capacity, both in terms of numbers, skills, and distribution of HRH, is one of the main barriers to improving health care. The National Action Plan for Primary Health Care, a planning document of the Sierra Leonean Ministry of Health for the restructuring of the country’s rural health services, is analyzed in its social, economic, and historical context. It appears to be an attempt of the national government to gain control over the highly devolved healthcare delivery system, but the state has neither the political will nor the power to achieve this goal. The utility of the document is therefore in doubt, which raises two important questions: Whose interests does this plan services, and at whose cost?

The alarming rate at which both young and experienced doctors are dying is a call for concern for not only the citizens of this country but also the government, as it shows the illuminating declining health sectors’ decay over the years. The lack of support and encouragement for doctors over the seeded years past and present has led to a massive shortage of professionalism and commitment within the health sector. Sierra Leone has long struggled with some of the world’s worst health outcomes—including a maternal mortality epidemic in which a woman’s lifetime risk of dying in pregnancy or childbirth is 1 in 20. Extreme poverty prevents most families from accessing health care. And often the care they need isn’t available, given the country’s severe shortage of trained clinicians, health infrastructure, and medical supplies. While health workers at Connaught often found the conditions under which they worked deeply demoralizing, on numerous occasions we witnessed people make unscripted interventions in patient pathways to improve their trajectories.

We observed many small, mundane acts that bridged gaps in technical and bureaucratic systems and ensured the continuation of patient care across different departments, institutions, and staff. Such acts included the physical transportation of a laboratory request form to another department, a phone call to retrieve missing information about a patient from another hospital, and the bringing of a patient’s sample to a private laboratory (where lab tests are completed) free of charge through a trust fund set up by junior doctors.

The leading direct causes of maternal mortality in Sierra Leone are obstetric hemorrhage (46 percent), hypertension (22 percent), obstructed labor (21 percent), and sepsis (11 percent). According to the Centers for Disease Control (CDC), Sierra Leone has the highest maternal mortality rate in the world, and one of the highest mortality rates for children under five: out of 1,000 live births, over 13 mothers and 111 children under five die. To address this issue and prevent death among children under age five, CDC helped establish the Child Health and Mortality Prevention Surveillance (CHAMPS) network in partnership with the Ministry of Health and Sanitation (MOHS) and the Bill & Melinda Gates Foundation.

In Connaught Hospital, descriptions and experiences of health system failure are often rooted in breakdowns in the temporal and spatial coordination of patient care. Samples went missing, lab results were not collected, a stamp was put on the wrong form or medical files disappeared. These small instances of breakdown were rarely dramatic or climactic events. They did not compare emotional weight, for example, to moments when doctors had to triage scarce resources, such as when one junior doctor had to ‘play God’ by deciding which patient should receive the only oxygen machine on the ward. Nonetheless, health workers were aware that frequent small lapses in coordination could have huge ramifications for patient outcomes. Patient care is always temporally and spatially distributed in a hospital: biological samples are extracted from patient bodies and transported to the laboratory (and in some cases private laboratories off-site), and multiple specialist doctors who move between patients’ bedsides depend on medical files to ensure that important information is shared.

With such a challenging combination of circumstances, it is not surprising that the health statistics for Sierra Leone are within the bottom quartile for least-developed countries (LDCs). In its Health Sector Report, 3 life expectancy is 51.3 years and less than 5 mortality is between 120 and 156 per 1000 live births. At Connaught Government Hospital in Freetown, where ethnographic research was carried out, staff often described the challenge of caring for patients in the face of an absent or broken system. Health workers pointed to a chronic shortage of essential equipment and resources, including diagnostic machines, laboratory reagents, and essential medicines, as major impediments to the accurate diagnosis of disease and the effective treatment of patients. But beyond noticeable material absences, health workers also described the less visible daily grind of working to coordinate care across different people, departments, institutions, and technologies in the busy hospital when ‘systems don’t work.