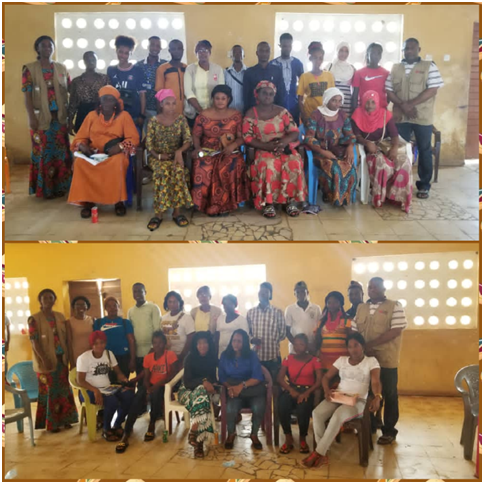 Giving an overview of the workshop, Idriss Gibson Mansaray, Programme Manager of Caritas Freetown, intimated that the purpose of  the workshop is geared towards providing civic and voter education for citizens as they prepare to participate in the upcoming Presidential, Parliamentary and Local Council elections.

He furthered that they selected Wards from two different constituencies, Constituency 111 Ward 394 and Ward 385 in Constituency 108, which according to him, are hot spots in the Western Rural District during election periods.

He revealed to this medium that among the 30 people that were selected, 20 are women and 10 are men further maintaining that the reason for such is because women are more vulnerable than men.

“The people who often engage in conflicts are men; the ones that suffer most are women. We also selected more women than men because during elections their number outweighs the men,” Idriss Gibson Mansaray asserted.

He noted that the workshop was slated to target different political party supporters revealing how the beneficiaries were selected by their parties.

The Programme Manager revealed that the participants were taught when to register, how to register, their right to vote and to be voted for,  their sovereign right to make their choices, and for them  to also contest if they wish to, their right to belong to political parties and lastly to understand the electioneering processes.

“Election processes starts with registration and registration is too near from now, and that is why we want them to understand the processes, their civic rights and their responsibilities,” Idriss Mansaray stated.

Speaking at the training, Eliza Sillah, the Programme Manager of Caritas Justice and Peace Commission stated that they must understand their roles and obligations as citizens in a democracy, explaining how they should also know the importance of voting.

Madam Eliza taught the participants about the process and voting procedures, she further taught them how to make informed and independent choices in selecting their preferred candidates or parties.

Isatu Sesay, one of the participants from Deep-Eye Water, expressed her gratitude to the organization for such an educative training, stating how she learnt more about her rights and responsibilities as a citizen, and how when she returns to her community she will educate them on what she has learnt.

Ishmael Goba, another participant from Monkey Bush, also applauded the organization for such a timely gesture in educating them on civic and voter education rights, promising that he will cascade the knowledge acquired to his community.

Climax of the opening event was an interactive session followed by questions and answers.