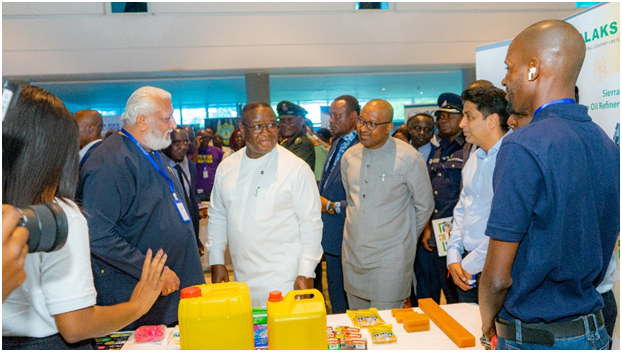 The Government of Sierra Leone, through the Office of the Vice President, hosted over 500 promising young Sierra Leoneans, aged 18-35 years, from across the country during the country’s first National Youth Employment and Entrepreneurship Fair (NYEEF).

It was launched by President Julius Maada Bio on the 15th November 2022 and the attendees included Government Officials, Diplomats, Development Partners, Private Sector representatives, The Republic of Rwanda’s Minister of Youth and Culture and representatives from YouthConnekt Africa.

The event commenced on the 15th November 2022 and is expected to end today, the 17th November, 2022 at the Freetown International Conference Centre in Aberdeen, Freetown, Sierra Leone.

Representing the manufacturing, food production and distribution sector in the country at the event was the Chief Executive Officer and Proprietor of Pee Cee and Sons, which is one of the partners that organized the fair , Mahesh Nandwani, thanked his Excellency, the President Julius Maada Bio and the Government for availing them the opportunity to be part of such an important programme.

He registered his satisfaction and appreciation to be part of the epoch making event stating how it gave them the opportunity to interact with young graduates and job seekers and explained to them the competencies and skills that are needed to bolster the manufacturing and food production sector.

Mahesh Nandwani further informed that the manufacturing and food production as well as distribution sector form the largest job creation entity in the country as it provides more jobs for young people in various categories.

He made mention of the fact that out of his 40 years in the sector he can state categorically that the manufacturing, food production and distribution holds the key to job creation in this country.

He underscored how it is providing numerous opportunities and enormous potentials for young people from the processing to the marketing of various end products.

The Chief Executive Officer and Proprietor of Pee Cee and Sons, Mahesh Nandwani, also thanked the Government for the strides it has taken to make the sector very competitive making reference to improvements in the energy sector adding that such has reduced the overhead costs of production greatly on manufacturers.

He disclosed that since 2018 the country witnessed the establishment of various companies including Jollaks Manufacturing Company which, he said he owns and consists of an oil refinery and a soap noodle plant and after fulfilling certain local demands are now manufacturing and exporting cooking oil and soap noodles to over five countries in Africa.

The shrewd businessman intimated that through the exportation of the products they are manufacturing they have formed partnerships with other well established companies in the West African sub-region with emphasis on the one in Guinea.

Also making reference to the company in Guinea, he said, it is also participating in the fair and will obviously create job opportunities in its operations.

He said they are welcoming this new company into the country as a partner as they are poised to create various job opportunities and skills transfer that young people could benefit from immensely in terms of accessing jobs.

It must be noted that the NYEEF is part of the broader vision of His Excellency President Julius Maada Bio’s Human Capital Development agenda, designed to invest in the young people of Sierra Leone and unleash their potential.

The three-day networking and learning event with the tagline, “Be Inspired, Take Ownership of Your Future Career!” was held in collaboration with Ministries of Labour & Social Security, Technical & Higher Education, Trade & Industry and Youth Affairs.

The objectives of NYEEF are to connect final year students and job seekers to employers and place them in decent jobs, to improve the ability of students to apply for and secure jobs and to enhance the competencies of young people who choose entrepreneurship.

In total, 567 final year students, job seekers and (aspiring) entrepreneurs registered, and they were brought down to 514 participants representing each district. Participants were made up of 30 participants with disabilities and 206 women -in accordance with the NYEEFs inclusion policy.

Over the three-day period  26 young entrepreneurs showcase their products and services in the car park of the Freetown International Conference Centre..

The National Youth Employment and Entrepreneurship Fair was a “timely and amazing event!”