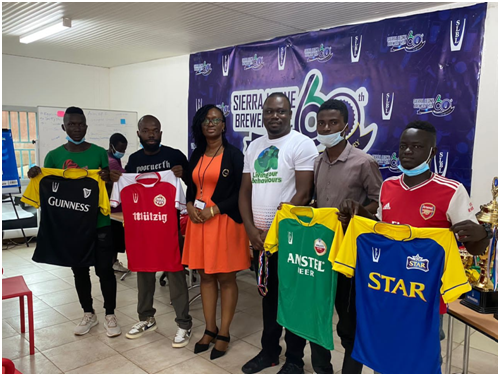 The Sierra Leone Brewery Limited (SLBL) has on Tuesday 15th November, 2022 officially launched its 60thAnniversary Celebration to the media which was also followed by an announcement of a three days football gala organized for their immediate neighboring communities to participate in tagged: “True Togetherness Inter-Community Football Gala.” The ceremony was held at the Sierra Leone Brewery Limited Head office on Wellington in the East End of Freetown.

Communications Manager of the Sierra Leone Brewery Limited Company, Unisa Conteh, informed newsmen that the company has already supplied customized football kits having their various brands of products which residents from the various communities balloted for.

He revealed that the first winner of the Football Gala will receive NLe 10,000; the first runner-up NLE 5,000 and NLE 2,000 each for the losing teams that would not make it to the grand finale.

Speaking during the ceremony, the Corporate Affairs Manager at Sierra Leone Brewery Limited, Foday Daboh said that 60 years ago specifically on the 25th November, 1962, STAR Lager Beer was brewed by the Sierra Leone Brewery Limited which marked their journey to 60, adding that officially they are launching the SLBL’s 60th Anniversary Celebration demonstrating their purpose of the joy of true togetherness and celebrating in grand style.

He expressed the belief that when the Heineken African Foundation decided to make Sierra Leone the home of one of its operating companies in Africa, they would had by that time considered many things, one could be that Sierra Leoneans are one of the warmest people in world stating that where else it is better to serve beer than a place warm enough to bring people together and it could also be that they found young, willing, talented and able-bodied people who were ready to set the right foundations as locals supported by the experienced Heineken team at that time.

“Decades past and we have witnessed the highs and the lows of beautiful Mama Salone, the war that led to the Brewery being burnt or Ebola that claimed the lives of thousands of Sierra Leoneans, or the mudslide and then Corona virus. We have been a part of it all. But what remains constant is that we continue to bring people together in the spirit of true togetherness celebrating our nation’s resilience. We can only be the greatest company in Sierra Leone and there can only be 1 SLBL,” Foday Daboh said with pride.

He stated they are an innovative company listening not only to their intuition but bringing in the consumers closer to everything they do stating that brands have come and gone but still one can see that Guinness, Mutzig, Heineken and Amstel are leading their premium portfolio, that Star Beer remains their national pride and they see Maltina leading the malt category, even considering female consumers with low ABV Star Citron and launching the first ever dark malt energy drink called Trenk

Foday Daboh pointed out that the journey of 60 years records immense contribution to nation building whilst also transforming lives demonstrating that they are indeed a partner for growth and development in the country.

“Colleagues all, we can only get better and I believe that we have the right people to push us to the next 60 years. The journey is only beginning. Winning is part of our culture and even at 60 years we will continue to win. We remain 60 years young,” he euphemistically concluded.