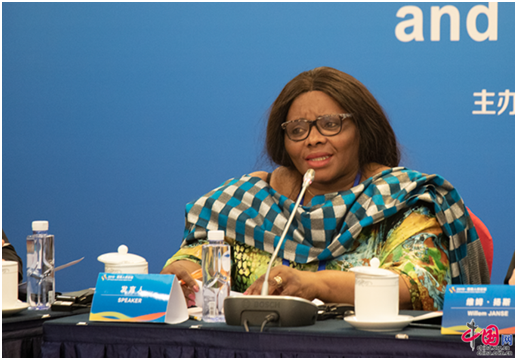 The Human Rights Commission of Sierra Leone (HRCSL) in a Press Statement signed by its Chairperson, Patricia Narsu Ndanema, stated on the 12th August,2022 that it came to its notice through a Press Release from the Sierra Leone Police (SLP) and various social media platforms, that a group of people wanted to stage a protest against the Government of Sierra Leone within the period 8th-10th August 2022.

HRCSL stated that in light of the above, the Commission continuously monitored the situation nationwide and also observed messages from some social media enthusiasts and bloggers at home and abroad.

It revealed that additionally, a real time monitoring by two Commissioners and staff who were in Makeni City on official assignment was also done and consequent on the above, it observed and noted the following: That during the said period the Sierra Leone Police (SLP) informed the public by a Press Release dated 6th August 2022 noting that “no group or group of persons have requested for permission as required by law, either verbally or in writing, from the police to hold such demonstrations. Nobody has come forward as leader or organizer of such events.”

The Commission said despite the Press Release by the Sierra Leone Police, it was observed that some people insisted in carrying out the protest even without police permission.

It also stated that despite the said Press Release and the deployment of strategic police commanders, both identifiable and unknown bloggers and enthusiasts continued writing and sending audio messages and videos on social media calling on citizens to take to the streets in protest or identify a place where they could assemble without procession in protest of their rights;

That the result of the build-up and enduring incitement culminated into a violent riot on 10th August 2022 in the Eastern part of Freetown (the capital city), Makeni City and Kamakwei Township both in the North Eastern Region; and Lungi Township in Kaffu Bullom Chiefdom, Port Loko district in the North Western Region adding that despite the cited locations, the rest of the country was peaceful.

The Commission also said it observed that on the third day of the protest i.e. 10th August there were killings of security personnel who were hacked in the most gruesome way, the death and wounding of civilians, blocking of roads, and the destruction of properties including Government and private vehicles and the burning of police stations.

It added that guns, sticks, cutlasses, stones, tyres and other arms were seen brandished by violent crowds during the protests.

That during the violent protests the Honorable Vice President declared a nationwide curfew from 3pm-7am on 10th August which was not observed in some of the chaotic areas and that the curfew was extended from 7pm-7am.on subsequent days.

HRCSL stated that in light of the observations and findings, it would like to make the following statements and clarifications: That the right to Freedom of Assembly and Association is guaranteed under Section 26 (1) of the Constitution of Sierra Leone 1991 which stipulates as follows: Except with his own consent, no person shall be hindered in the enjoyment of his freedom of assembly and association, that is to say, his right to assemble freely and associate with other persons and in particular to form or belong to any political party, trade unions or other economic, social or professional associations, national or international, for the protection of his interests.

That while HRCSL has persistently called for the fulfillment of the right to peaceful and organized assemblies and associations to be backed by police protection/security, it has always equally reminded citizens that the right to freedom of assembly and association has conditions and that it is worthy to note that there are always exceptions provided under the laws.

According to the HRCSL, Subsection (2) of the same Section 26 of the Constitution provides as follows; Nothing contained in or done under the authority of any law shall be held to be inconsistent with or in contravention of this section to the extent that the law in question makes provision which is reasonably required in the interest of defence, public safety, public order, public morality, public health, or provision for the maintenance of supplies and services essential to the life of the community; or for the purpose of protecting the rights and freedoms of other persons;

These exceptions and circumstances as contained in the Constitution, the HRCSL stated, are the same under the law that makes specific provisions and procedures for public processions.

It said Section 17 of the Public Order Act, 1965 (POA) provides thus: Any person who intends to take part or takes part in organizing or holding any procession shall first notify the Commissioner of Police in writing of his intention to do so and any person who fails to give such notification as aforesaid shall be guilty of an offence.

That the Commissioner of Police shall by order in writing addressed to such persons giving notice, disallow the holding of any procession or impose such conditions as he shall think fit on any procession where in his opinion the interests of defence, public order, public safety or public morality so require.

HRCSL states that Articles 21 and 22 of the International Covenant on Civil and Political Rights, 1966 and Article 11 of the African Charter on Human and Peoples’ Rights, 1986 are instructive regional and international legal instruments on the right to freedom of assembly and association to which Sierra Leone is a signatory.

That having reviewed the laws both, national, regional and international instruments, HRCSL is of the view that the right to freedom of association and assembly is not a non-derogable right or an absolute right and therefore reasonably restricted by law. It should be further noted that there is no provision in these laws guaranteeing protest; instead peaceful assemblies and processions are what the law guarantees.

In view of the above, the HRCSL said it considers the violent protests of 10th August 2022 as unlawful and illegal.

The Commission stated that it is hereby STRONGLY and ROUNDLY condemning the brutal killing of police officers and the loss of lives of innocent citizens owing to the said violent protests.

To that end, the HRCSL made the following recommendations; That the Security Sector should immediately arrest, investigate and prosecute all those who incited and those who were directly involved in the said violent and unlawful protest in accordance with relevant laws without any exceptions; that the Security Sector should do all it can to recover arms and ammunition that are in the wrong hands as was observed during the protests maintaining that such arms pose a threat to the enjoyment of the rights to life and security of persons, that the Cyber Security Unit of the Sierra Leone Police continue to track down all persons perpetrating hateful messages that will lead to riots, social disorder and subsequently eroding the security of the State.

The HRCSL also recommended that citizens be law abiding in line with the provisions stipulated in Sections 13 (a-j) of the Constitution of Sierra Leone 1991, respect authorities of the State and resist any form of lawlessness and incitement howsoever.

The Commission reiterates that it deeply expresses its condolences to the families of all Sierra Leone Police Officers and other families who lost their relatives during the dreadful incident stating that it is taking the opportunity to assure the general public of its unwavering commitment to the protection and promotion of the Human Rights of all in Sierra Leone.