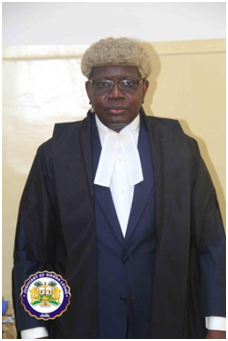 In 2019, the current Chief Justice, His Lordship Justice Desmond Babatunde Edwards had to settle on behalf of the Judiciary over 10 years none payment and today the institution continues to pay their subscription fees.

Hon. Justice Roberts defeated candidates from Nigeria and Ghana. He is the first Sierra Leonean to hold such a position.

This is not the first recognition bestowed on Hon. Justice Roberts. Recently, Judges of the Residual Special Court for Sierra Leone in a plenary meeting in The Hague, Netherlands elected Justice Pierre G. Boutet to a two-year term as Residual Special Court President and Supreme Court’s Justice Emmanuel Ekundayo Roberts as Vice President.

He received his LLB from Fourah Bay College, University of Sierra Leone, in 1989 and his BL in 1990 from the Sierra Leone Law School. From 2003 to 2007, he worked as a Legal Consultant at the Law Officers Department in Freetown. Since 2005, he has also been a Lecturer in Civil Procedure at the Sierra Leone Law School. In 2010, he was made a Fellow of the Commonwealth Judicial Education Institute in Halifax, Nova Scotia, Canada.