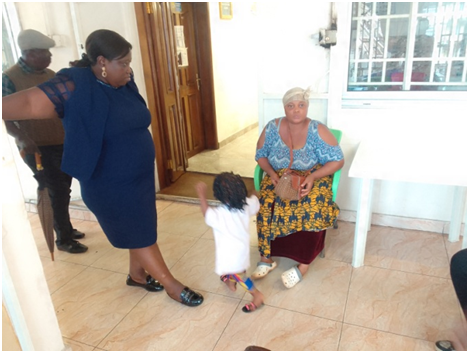 Mabel George brought a Child Maintenance matter to the Legal Aid Board a few months ago. She had dragged her partner/daughter’s father to the Board for failing to take care of his daughter. The matter was mediated and an agreement was reached which provides that the father should pay three hundred Leones (Le300,000) per month towards the upkeep of the child.

The money does not cover schooling, medical and accommodation. The agreement provides that they must be catered for separately.  This part of the agreement is usually explained and emphasized because it is prone to being misunderstood by fathers.

Following the agreement, a child maintenance account was opened at the Rokel Commercial Bank outlet at the Legal Aid Board head office in Freetown. The account number was given to the father for him to pay in the amount agreed on at the end of every month. Mabel went home feeling happy that life will be better for her daughter moving forward.

However, few months down the line, a visibly emotionally drained Mabel was back to the office on the 1 August 2022 to lodge a complaint against her daughter’s father who has reneged on the agreement to provide money for the schooling for his daughter. She is worried if nothing done by the Board her daughter could miss out of school in the new academic year.

The questions begging for answers are: Is this misconception due to a lack of proper explanation of the subject matter to the father during the mediation? Is the father feigning ignorance? Is the father being lazy and irresponsible?

While one may not have clear cut answers to these questions, it must be underlined that complaints of these nature are not uncommon. This situation would have been avoided by any father who takes his responsibilities seriously by calling at the Legal Aid Board for clarification rather than wait until he is dragged to the Board and in the process result in suffering for the child until such a time when the matter is clarified. Moreover, it wouldn’t have taken the father more than one minute phone call to the Board to get such a clarification.

The timing of the complaint is concerning to us at the Board and mothers with school-going children. With the reopening of schools for the new academic year some six weeks away, this is a sign of what is to come if past lessons are anything to go by.  This is because, complaints regarding the refusal or failure of fathers to provide money for schooling (school fees in case of those in private schools, books, uniforms, shoes) in the weeks leading to the reopening of schools more so for the new academic are not new.

Also, there is increase in disputes around child custody during this period. Fathers either refuse to release or delay in releasing children to their mothers in time for the reopening of schools. This creates a lot of tension and animosity.

Since the Alternative Dispute Resolution/Mediation was introduced in 2016, the Board has struggled to cope with the sheer number of such complaints around the country over the years. Last year, the Board mediated 1,372 child maintenance cases relating to schooling in the weeks leading to the reopening of schools for the new academic year and four weeks into the new academic year.  The million dollar question is: Are things going to be different this time around? The answer is yes!

The difference this time around is that the Board has learned its lessons and therefore will have these matters resolved prior to the opening of schools so that no child will miss out on the first day of school. This is why it is rolling out series of programmes to ensure compliance with Child Maintenance Agreements or at the very least bring non-compliance to the barest minimum relative to previous years.

These will include stepping up community outreach events, radio interviews, phone-ins on community radios, engagements with local stakeholders including Paramount Chiefs, engagement with Office of the Chief Justice for the setting aside of a Magistrate Court exclusively for child maintenance matters for six weeks from August to September 2022 and engagements with traditional court administrations (Local and Informal Courts).

Children in government and government assisted schools will not be left out. It is easy to assume they are not affected by these problems because Government is paying their school fees and also providing some basics. The reality is, they also have issues around uniforms, shoes, fare and lunch.

To reduce the pressure, the Board will be strategic in handling these issues to avoid being overwhelmed as in previous years. For start, the Board is advising mothers/clients to bring matters against fathers who have made it very clear they will not provide money for schooling for their children.

They should do same for custody matters. For instance, fathers who have made it clear that they will not release children to their mothers in time for the reopening of schools.  The Board hopes to mediate these matters as quickly as possible or take them to court where mediation fails.

Next in line will be fathers who are not following through on their promise to provide money for schooling. These matters should be brought to the Board by the third week of August if they do not follow through on their promise. This should also apply in the case of fathers who dismiss any talk of providing money for schooling on the grounds that they are unemployed or hard-up. We are talking of fathers who advance the lazy excuses that they cannot take care of their children because they are unemployed.

There is also the issue of fathers who are outside the jurisdiction of Sierra Leone particularly in the U.S., Europe and Australia who have abandoned their wives and children back home. They have left the burden of bringing up their children in the hands of their mothers. The Board is looking for partners who could help track these fathers and have them provide for their children.