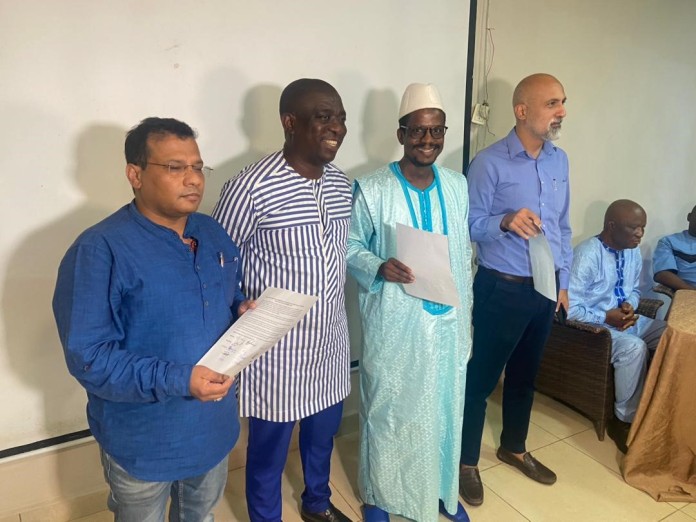 Mobile Network Operators, including Orange – SL, Africell, and Quell have on Friday 2nd December 2022 held a Consultative engagement with key stakeholders in what was described as Public Private Dialogue (PPD) on the need for a review on the cost of tariff across these Network Service Providers.

This, according to them, came against the backdrop of the unprecedented hike in dollar exchange rate in the nation which has had significant adverse effects on their operations as Mobile Network Operators (MNOs) such as what they spend in building new network sites, paying of huge capacity of staff, cost of fuel and their usual gesture in the form of Corporate Service Responsibilities (CSR) among other things.

The Director General of the National Telecommunications Authority (NaTcA), Daniel Bobson Kaitibi, said that while they understandably empathize with the MNOs, but the proposal would have to be critically looked into further recommendations adding that even if an increment in the cost for tariff would have to set in, let it be minimal so as to make their networks not only accessible but also affordable and available.

Mr. Kabia, who happens to be one of the Commissioners at NaTcA, recommended also that much as he endorses the need for an increment in the price for tariff, given the prevailing circumstances as advanced by MNOs, he advised that let it be minimal relying on Section 118 (2) (a) of the NATCA Act as amended adding that the networks should not only be accessible and affordable, but should be available and acceptable.

While making their remarks, both the Minster and Deputy Minister of Information and Communications – Mohamed Rahman Swaray and Solomon Jamiru (Esq.) respectively recommended to MNOs that wider consultations with consumers should be undertaken or embarked on

It must be noted that in a recent compelling statement issued during a Media Retreat and CSOs Engagement; Mobile Network Operators (MNOs) in Sierra Leone stated that they have good reasons for to increase Tariff in order to improve connectivity and sustainability.

Speaking to journalists, the telecommunications companies’ representatives said their sector has been one of the key drivers towards the development of ICT in the country and their contributions over the years towards the implementation of the President’s manifesto remains enormous.

They said their apparent commitment can be seen in being the biggest taxpayers and one of the largest employers and CSR Contributors of this country.

Over the years, they added, they have expanded their networks to reach remote areas with telecom services resulting to the construction of over 1000 sites and achieving a population coverage exceeding 90%.

The companies went on that they have launched 4G and 4G+ technologies for enhanced data speed and today their internet prices remain one the cheapest in the sub-region.

“We have created job opportunities for over 100,000 Sierra Leoneans with direct and indirect employment and remain a strong pillar for CSR and sponsorships in the country. We have launched foundations, Data, learning and e-learning centers, and have provided support for every facet of society in the media, entertainment, sports, entrepreneurship, and many other industries in this country. We have also renovated hospitals, health centers and supported disability and vulnerable members of our society, we have also built many schools, equipped classrooms, supported artists, football clubs and premierships, the national football team and provided learning courses nationwide to both primary, secondary, and tertiary institutions” they stated.

In a press statement, the companies said: “All of these contributions and achievements from our sector could not have materialized without their vast collective investments.”

For them to continue on the same trajectory, the telecommunications sector must be able to continue investing in infrastructure, making devices available and affordable and most importantly promoting a mutually beneficial relationship amongst all sector players and their valued consumers.

They added that whilst they understand the global economic challenges that affect the fabric of every nation today their sector is at an even worse position with the resultant effect being an exponential hike considering the cost of providing their services whilst trying to cope with the devaluation of the country’s currency having a fundamentally negative impact on their businesses and remain an impediment to their investment aspirations.

The telecommunications companies stated that whilst all other businesses have the freehand to increase their costs reflective of inflation and the devaluation of the Leone against the USD and other international currencies, their tariffs remain stagnated.

They complained that since the last tariff adjustment in 2017, the combined increase on some of their key cost variables stands at an alarming rate of 698% negative. These include the following:

Increase in Foreign Exchange rate against the Leones:

The present day value of the UD Dollar is at Le. 18,000 (Old Leones) to $1. This records an increase of 148% since the last GSM tariff change in 2017 when the exchange rate was Le. 7,258 (Old Leones) to $1. 50% of their costs go to CAPEX which is in dollars. How do we continue investing and sustaining our business when 50% of our CAPX alone has increased by 148% whilst our selling price remain the same?

Fuel price is at Le. 25,000  (Old Leones) against Le. 6,000 per litre 5 years ago when the sector tariff was last reviewed. This records a colossal increase of 317% for a product that account for about high proportion of their total Opex.

Cost of Electricity Tariff and cost of Powering our Sites:

Even electricity tariff which is a similar utility service and a cost driver for their businesses has witnessed a significant increase of 78% from Le. 1,890 (old Leones) to Le. 3,364 (New Leones) as at July, 2022.

Previously, the cost of 1 Mbps data from Zoodlabs was $ 8. Today, it is $13 per GB recording 63% increase and continues to increase when the Leone’s value to the USD increases. To make matters worse, Zoodlab’s price is not only fixed in dollars they are charged at the commercial bank rate.

The cost of terrestrial fiber from Leoncom has also gone up significantly.

The Cost of Site Construction Materials (Steel and Cement)

Inflation as at today stands at more than 20% and could increase to 30%.

They said although they have struggled to absorb those increases over the years, the prevailing challenges are stifling their businesses and the situation is no longer sustainable.

“If our sector is left unattended to address the challenges we face today, the effect will be such that jobs will be lost, QoS will be impacted, our contribution towards CSR will be grossly reduced, rural sites that are heavily subsidized will be shut down,” the aggrieved telecommunications companies stated.

They emphasized on the criticality and the urgency to salvage their cry for tariff review, as that will foster and strengthen the sustainability of the telecommunication sector to increase their contributions to the development of ICT, whilst at the same time impacting the population of Sierra Leone and improving daily lives.

The companies are therefore calling for the immediate intervention of their regulatory stakeholders as their ability to further invest in Sierra Leone is dependent on resolving the prevailing challenges.

They concluded that the sector remains committed towards providing the best telecoms services in Sierra Leone and assured every Sierra Leonean that together they will fight and overcome the effects of the global economic challenges to become stronger and better.