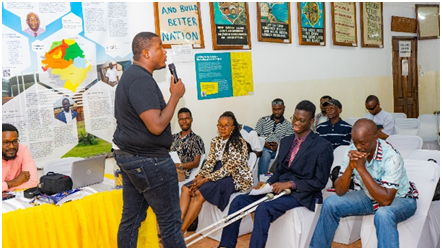 In his address, the Program Manager at One Family People, Samuel P.O.V. Macauley said as an organization that have been working towards the development of persons with disabilities in the country  and they are with the strong conviction that the training will help POs, CYWDs, Caregivers, OPDs to identify and prioritize key services and facilities that are available, accessible and affordable.

He added that the training will also strengthen the advocacy skills of CYWDs, caregivers, POs & OPDs to claim their rights to quality services in the country.

Samuel P.O.V. Macauley noted that over the years One Family People  partnered with organizations that have been working on  Child Empowerment Programs in the country, stating they believe that the effective and efficient implementation of the child empowerment program largely depends on the capacity of partner organizations to be sufficiently knowledgeable and equipped to implement the program of which he pointed out that the training will help build their capacities in that direction.

The Program Manager maintained that lobbying and advocacy are key components of CBR to increase their work for children with disabilities their parents and caregivers, furthering that over the years, One Family People and its Partner Organizations have engaged in lobbying and advocacy for disability rights across the country.

He revealed that at the end of the training the capacity of the caregiver’s POs, CYWDs, and OPDs that participated would have been strengthened and both POs, CYWDs, caregivers, OPDs will be able to identify and advocate for quality services.

The Program Manager also noted that participants of the training will be equipped in evidence-based advocacy.

In his presentation, the Executive Director for Center for Research Peace and Youth Affairs, Prezo Abdul Kpaka, commended One Family People for engaging CYWDs, caregivers, POs & OPDs on people-centered advocacy as a result-based reporting to strengthen their advocacy skills in order for them to claim their rights to quality services in the country.

He said that advocacy plays a major role in having the voices of citizens heard by individuals in power and that through advocacy individuals are able to foster a sense of community and solidarity in order to promote their cause to the wider public, adding that over the years there have been a lot of issues faced by persons with disabilities in the country and that through advocacy those issues will be mitigated.

The Executive Director stated that the Persons with Disability Act, 2011 wholly encompasses the general principles of respect of disability as part of human diversity, dignity of the individual, participation as equal citizens, elimination of all forms of discrimination and stigma on grounds of disability, full inclusion of persons with disabilities in national development processes and programmes, and the promotion of positive attitudes towards persons with disabilities in the country.

Closing the session was an open discussion by participants in relation to the people-centered advocacy training.