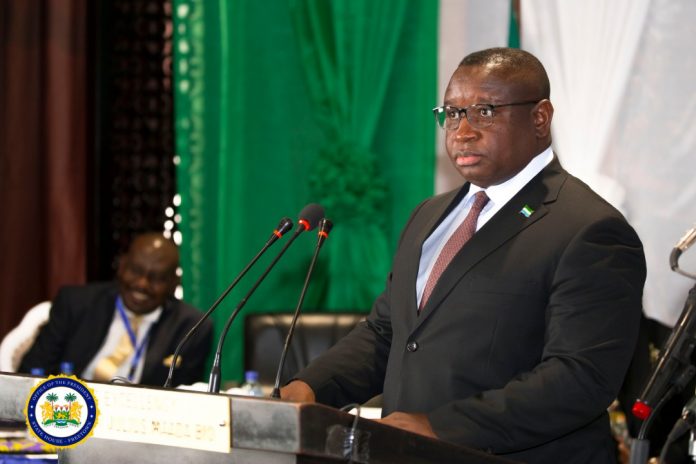 During the Judicial Training Workshop and Dialogue for Anglophone West Africa that took place on the 3 December 2019 at the Atlantic Hotel in Freetown, His Excellency President Dr. Julius Maada Bio stated that bad political governance and corruption restrict civic space and destroy the democratic polity.

The august gathering of distinguished lawyers from Sierra Leone, Nigeria, Ghana and the Gambia looked at the effective implementation of global, regional and sub-regional human rights norms in Anglophone West Africa. The forum was jointly organised by the Judicial and Legal Training Institute and the International Commission of Jurists.

President Bio said citizens would enjoy their inalienable human rights when civic and environmental governance were most conducive and transparent, noting that governance of the environment and the mitigation of the impact of human activity on the environment are also critical for the full enjoyment of the rights to food and health security.

He further maintained that Sierra Leone had signed and ratified treaties and conventions, domesticating them and setting up courts.

“We have domesticated most of these in our laws such as the Child Rights Act of 2007, the Domestic Violence Act of 2007, the Persons with Disability Act of 2011, the Distribution of Estates Act of 2007, the Registration of Customary Marriage and Divorce Act of 2007; and, the Sexual Offences Acts of 2012 and 2019. Sierra Leone is committed to respecting, promoting, protecting, and fulfilling the Human Rights of its citizens. Our Courts are addressing issues regarding Human Rights within powers enshrined in our Constitution Act No. 6 of 1991.

“We will also continue reviewing how other such progressive treaties as the African Charter on Human and People’s Rights will work with our domestic laws and judicial processes. Sierra Leone also maintains its affirmation of the goals of Agenda 2063,” he assured.

President Bio also told the gathering that Sierra Leone had five free elections and three peaceful transfers of powers in recent times, adding that his government would firmly consolidate a culture of democratic rule and democratic accountability.

“My Government has affirmed the right to education of the child by increasing allocations to education to an unprecedented 21% of the national budget. Together with the right to food security and quality healthcare, it is at the centre of the Government’s Human Capital Development priorities,” he noted.

The President concluded by saying that he wholeheartedly commended and supported the initiative of a dialogue, particularly with the involvement of the judiciary of Sierra Leone.

Honourable Justice Desmond Babatunde Edwards, the Chief Justice of the Republic of Sierra Leone, said in his keynote address that human rights were central to any society, whether it is from a political, civil, economic or cultural standpoint. He added that all human beings were born free and were equal in human rights, noting that there were, however, countless instances where those rights had been violated by a large number of the world’s population.

“As independent judges, we stand as guarantors, guidance, protectors, and enforcers of human right norms and it is but pertinent and inevitable that we should choose to be competent and diligent judicial officers by equipping ourselves in ways as to acquire or reinforce knowledge in the subject, as to be sufficiently knowledgeable, possessing the requisite knowledge and gravitas to withstand any challenge on human rights, no matter where it is coming from.

President of the Sierra Leone Bar Association, Robert Kowa Esq said that the practice of human rights was grounded in the nature of the human being themselves, adding that he was confident that the training would provide practical tools to effect the commitment goals in the attainment of human rights, standards and norms. He also added that it would promote and protect good governance in the respective countries

Chairperson of the Sierra Leone Human Rights Commission, Patricia Nansu Ndanema, said that she was gratified to be part of the experience-sharing occasion that was geared towards the protection and respect of the dignity of human rights. She said that the occasion showed commitment on the part of Anglophone West Africa for the promotion of human rights norms.

“Application of human rights norms within the justice system is crucial, but if discussions are put into actions, then I remain very optimistic that they will lay strong foundation to address many human rights concerns within the justice system which include but not limited to the long delays of prison inmates to enjoy their rights to be heard and on time and the long term detention without indictment. I believe experiences shared here will better improve on the effectiveness of the structures that are meant to restore hope when victims access them,” she said.