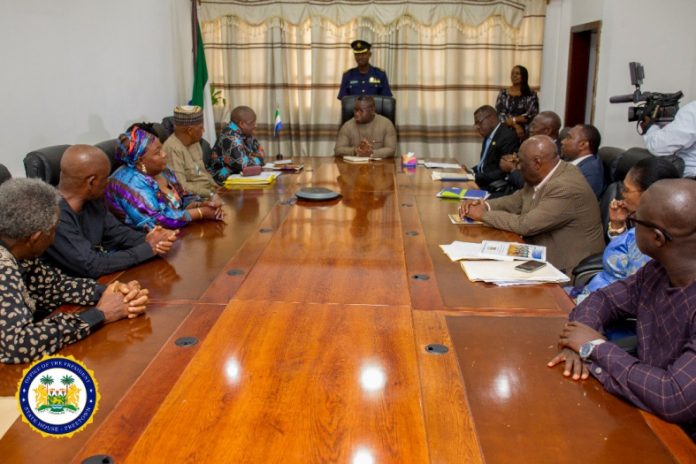 The Tejan Kabbah Foundation for Peace and Democracy has called at State House to pay a courtesy call on His Excellency President Julius Maada Bio and to congratulate him on his first anniversary in office.

Ambassador Alie Bangura, who led the team, explained the motive behind the formation of the Foundation, noting that it was mainly in honour of the hard work of late President Alhaji Ahmad Tejan Kabbah, who played an important role in the democratic consolidation of Sierra Leone.

“On behalf of the Tejan Kabbah Foundation for Peace and Democracy, I congratulate you on your elections and on your one year anniversary in office as President of the country. We want to officially launch the Foundation and we want to ask your kind permission, as President of the country, before we can invite former Presidents, Olusegun Obasanjo of Nigeria, John Dramani Mahama of Ghana and Ellen Johnson Sirleaf of Liberia who were contemporaries of the late president, who also helped strengthened the democracy of Sierra Leone,” he said.

In response, His Excellency President Julius Maada Bio thanked the leadership of the Tejan Kabbah Foundation for holding the fort since the death of the former president who, he said, the country would always remember for the role he played in transforming the country into a democratic state.

“This is a good initiate and I am in support of its official launch. We owe it all to the late President Tejan Kabbah for the role he played in this country. I was Head of State that ushered him as democratic president and I know his valuable contributions and sacrifices. We have to give honour to whom it is due,” he noted.

The President also stated that it was worthwhile to honour people who had sacrificed for their motherland, particularly during those dark days of Sierra Leone, and pledged to support in whatever way for the Foundation to continue to contribute to nation building.

Alhaji Ahmad Tejan Kabbah, who oversaw the end of the country’s brutal 11-year civil war, died in Freetown on Thursday 13 March 2014 at 82, served twice as the third President of Sierra Leone, from 1996 to 1997 and again from 1998 to 2007. An economist and attorney by profession, Dr. Kabbah spent many years working for the United Nations Development Programme.