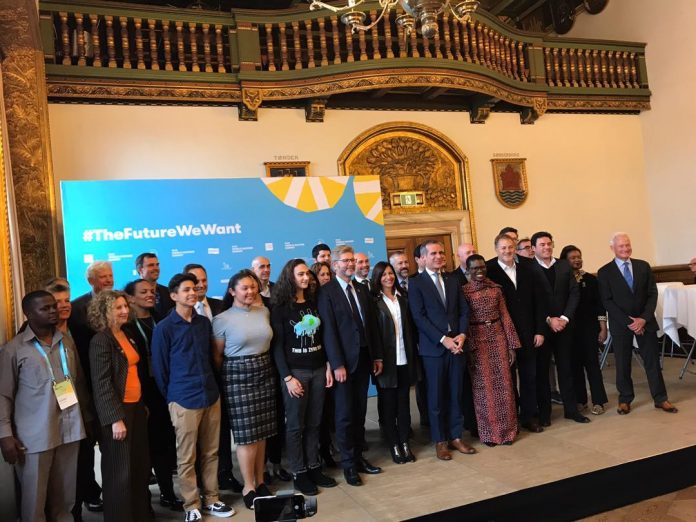 Her Worship the Mayor of the Freetown Municipality, Aki-Sawyerr, has on Wednesday 9th October, 2019 joined an unprecedented gathering of 80 mayors and hundreds of climate leaders  at the C40 World Mayors Summit. The Summit, hosted by C40 Cities, the City of Copenhagen and Realdania, is now ongoing starting on the 9th October 2019 and will end on the 12th October, 2019 in Copenhagen.

Mayor Aki-Sawyerr was invited to be part of the panel of Mayors that launched the Summit during a press conference held at the Copenhagen City Hall. The panel included Anne Hidalgo (Mayor of Paris), Frank Jensen (Lord Mayor of Copenhagen) and Eric Garcetti (Mayor of Los Angeles) and the new Chair of C40 Cities. Together with the other mayors, Mayor Aki-Sawyerr will address the new global climate emergency and comment on the Global Green New Deal, which is the plan to address the climate emergency.

Mayor Aki-Sawyerr will also take part in a public debate on the question, “Will Cities Get the Work Done?” during which she will share Freetown’s perspective on global challenges related to climate change and about the role of cities in the fight to tackle climate change.

Mayor Aki-Sawyerr will also take part in a roundtable discussion, led by the Lord Mayor of Copenhagen, with youth climate leaders from around the world. The roundtable discussion, aims to know what young people want to see achieved with the Global Green New Deal and how they can work together with cities to make that a reality.

Ahead of the Summit, Mayor Aki-Sawyerr was invited to speak at the Danish Technological University’s SkyLab, where she shared work that Freetown City Council is doing in the environmental management and sanitation sectors of the Transform Freetown Agenda. Other speakers included Denmark’s Minister of Development, academics, the private sector and innovators.