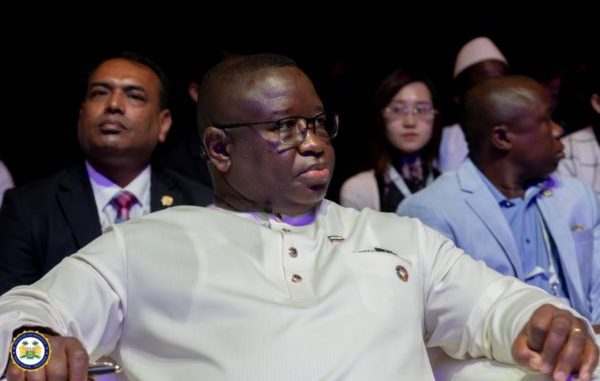 The ruling Sierra Leone People’s Party (SLPP) has finally got its revised Constitution which reflects its new party structure approved by the country’s Political Parties Registration Commission (PPRC). This came after almost a year of internal political machinations and intrigue.

According to the new Constitution, the role of Chairman is now separated from the Leader of the party.

These constitutional changes now mean that with immediate effect, President Julius Maada Bio becomes the Leader of the SLPP party and Vice President, Mohamed Juldeh Jalloh, is the Deputy Leader.

The new structure also removes the enormous power previously wielded by the party Chairman, Dr. Prince Harding. His role is now relegated simply and solely to the administrative functions of the party, paving the way for a much younger party Chairman to be elected at the party’s national convention possibly later this year.

Critics of the new constitutional structure within the SLPP party, say that this change will now give President Bio absolute power in selecting future presidential candidate of the party as well as the running mate for elections.

It will also give President Bio greater say in deciding who gets party symbol to contest parliamentary elections.

Given the massive power now vested on the shoulders of President Bio by the new Constitution, it is highly unlikely anyone within the party would contest against him for the Chairmanship in a long while.

Some critics are already accusing President Bio of setting himself up to become the lifetime Chairman of the ruling SLPP party, an accusation levied at the main opposition’s Chairman and former President of Sierra Leone, Dr. Ernest Bai Koroma, who is still hanging on to the chairmanship of the APC party.

“In keeping with the changing dynamics of the democratic landscape of the world in general and Sierra Leone in particular, the Sierra Leone People’s Party saw a compelling need to amend its 1995 constitution, without any breach of the 1991 Constitution of Sierra Leone.

“Consistent with the statutory provisions of the 1991 Sierra Leone constitution vis-a-vis Section 35 subsection 2, on the 8th of December 2018, the National Executive Council (NEC) of the party, mandated the National Executive to set up a committee that was specifically tasked with the responsibility of reviewing 1995 SLPP Constitution as amended.

“On the 29th June 2019 at the Wizard Hall in Bo city, a Constitutional Review Committee (CRC) was empanelled after approval by the NEC and mandated to draft a new constitution for the SLPP.

“After weeks of CRC meetings, consultations and brainstorming, on the 17th August 2019, the newly drafted constitution was presented to the NEC for onward presentation to all regional, district and branch members of the party for their input and recommendations.

“This wide ranging exercise was for a 90 day period in order to give all branches an opportunity of owning the process and being contributors to the new SLPP constitution.

“At the elapse of the 90 days consultation period, on the 28th November, NEC was convened with the purpose of setting a date for a National Party Conference at which meeting the new draft constitution was to be ratified and approved and subsequently forwarded to the Political Parties Registration Commission (PPRC). This is consistent with Section 24 subsections 1 and 2 of the Political Parties Act of 2002.

“On the 6th 7th and 8th December 2019, at the Catco International Hall in Freetown, the National Delegates of the party unanimously approved and ratified the new draft constitution and directed the National Executive to present it to the PPRC for it to be published in the National Gazette.

“In March 2020, the new draft constitution was presented to the PPRC for publication in the National Gazette as per law required, and on the 6th of March 2020 it was duly published by the PPRC with the general public invited to raise objections and concerns.

“Five objections were made by the public to the PPRC and they were communicated to the party for response. The party duly responded to the objections and submitted it to the PPRC.

“By a ruling dated 17th July 2020, the PPRC directed the party to amend some provisions of the draft constitution and submit the amended version to it for publication, and to make way for it to come into force after five working days. On the 7th August 2020, the final amended version of the SLPP constitution, as per the directives of the PPRC was presented for publication, and on the 11th August 2020, the final draft was published by the PPRC.

“Accordingly, on Wednesday 19th August 2020, the new constitution would officially come into force as the guiding document of the SLPP, after fulfilling all provisions of the 1991 Sierra Leone Constitution, the Political Parties Registration Act of 2002, and the SLPP 1995 Constitution as amended.

“The new constitution of the SLPP has duly approved His Excellency President Julius Maada Bio as the Leader of the party, and Vice President Dr. Mohamed Juldeh Jalloh as Deputy Leader.

“In keeping in line with democratic and statutory regulations, the SLPP has clearly raised the bar for democratic plurality and practice in the national body politic. As the oldest surviving ruling party in West Africa, this latest exercise has set the pace for a proper and effective democratic practice in the Republic of Sierra Leone.