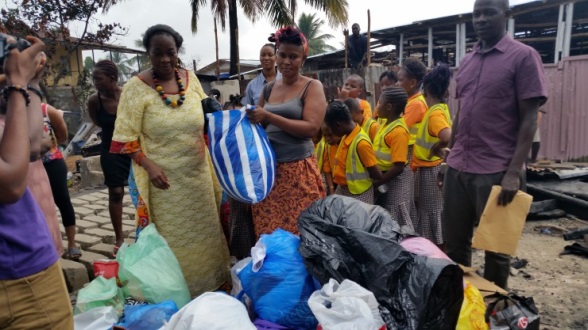 In order to give succour to the distressed, the Excel Daycare and Primary School with motto, “Building a Firm Foundation”, has donated rice, clothing, shoes, bags and food  provisions to residents of Tengbeh Town who were devastated by a fire incident.

The donation, which was made possible by the children, their parents and the school authorities, was geared towards consoling the fire victims and a means of expressing love.

Proprietress of Excel Day Care and Primary School, Mrs Onike King, while presenting the items consoled the victims by telling them not to lose hope because of the ugly incident but to give God praise for saving them.

She said at Excel School they teach the children to show love at all times. They should love their neighbors just as they love themselves. She expressed thanks to God for the provision, as they are encouraging the children to care for one another.

“I am happy we were able to do this. You are not alone. We are all together in this. Thank God no life was lost,”she consoled.

Mrs. King went on to say as a school they have been rendering help to the community in various ways especially those that can’t afford quality education for their kids disclosing that through a scholarship program they are supporting some.

She appealed to other well-wishers to support the victims and for them to contact the Freetown City Council for the process to be well organized.

One of the Parents, Mariama S. Jalloh, thanked God because no life was lost. She said the donation was not much but encouraged them to accept it and prayed that such an incident would not happen again in that community.

Thanking the school, on behalf of 27 families, one of the fire victims, Samuel Akim Conteh thanked Excel School for their support. He said the school has truly demonstrated that they are indeed a good neighbour further expressing hope that such incidents do not happen again.

Councilor of Ward 439, Tengbeh Town Community, Ahlassan Kalokoh, thanked the school for such a gesture. He said this is what he wants to see in the community; to show solidarity for each other. He said when the incident took place he was worried but what Excel School has done brought a sigh of relief to them.

Excel Daycare and Primary School is a few yards from the incident where the fire took place. The school has been enjoying cordial relationship with the community including the market women and the youths.  The fire outbreak at Tengbeh Town Community affected 27 families.