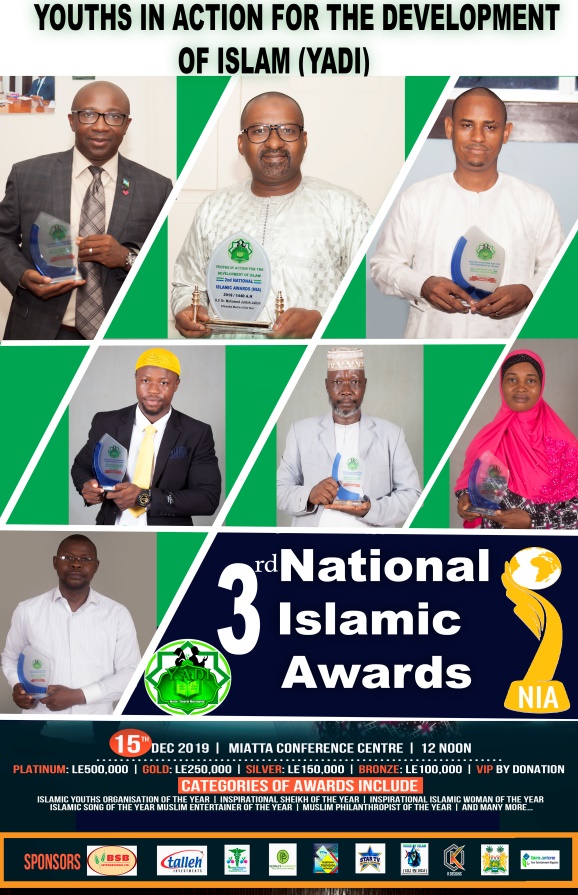 Youth in Action for the Development of Islam (YADI) has on Thursday 14th November unveils the voting process for the National Islamic Award 2019 at their online website.

Speaking to this medium in an interview Executive Director, Youth in Action for the Development of Islam (YADI) Amadu Wurie Barrie disclosed that the organization has finally unveiled its online voting process that will run from the 14th November, 2019 and it will end on the 5th December, 2019, adding that the voting process is going to be done online and Sierra Leoneans who wish to vote for their nominees should visit their organization’s website: www.yadisl.org

He said that after a thorough national nomination process including all district headquarter towns they have finally shortlisted qualified nominees for the award, adding that Sierra Leoneans at home and abroad can now vote for their nominees in various categories, and that after the unveiling process people have already stated voting for their nominees nationwide.

He disclosed that they have engaged Muslim stakeholders in relation to the said award and  assured Sierra Leoneans that they are prepared to ensure that they give them the very best including entertainment.

He finally guaranteed the general public that after the voting process deserving nominees will be given their awards further pointing out that the awards are prepared in Dubai and they are already in the country.

He stated that several individuals and entities have been working relentlessly towards the development of Islam. “But we’re deprived the honour and motivation to continue benevolent work. YADI saw it incumbent upon itself as an organization to promote, appreciate and inspire Muslims through this annual award program which will be third in a row,” he revealed.

He disclosed that the National Islamic Award is scheduled to take place on Sunday 15th December, 2019 at 7:00pm at the Miatta Conference Center in the presence of  a galaxy of dignitaries at home and abroad including diplomats, Muslim stakeholders etc.

He said that nominations were opened to the general public through the organization’s website (www.yadisl.org) from the 1st to the 30th September with outlines of the nominations criteria for every category, and that special personalities like Scholars, Sheikhs, Imams and other Islamic dignitaries were given the opportunity to nominate deserving nominees on hard copy forms.  He noted that there were 15 voting categories with 5 additional honorary categories of awards and that the Award Jury comprise trustworthy Islamic personalities from various fields with integrity, extensive experience and connection with the Islamic community in Sierra Leone.

He called on interested sponsors to contact +23276724085 for sponsorship details, adding that partnering with NIA will not only earn them great rewards from Allah, but also contribute to the promotion of their businesses and brands. He proceeded to reveal that this year going forward, sponsors will have the opportunity to name awards after their brands.