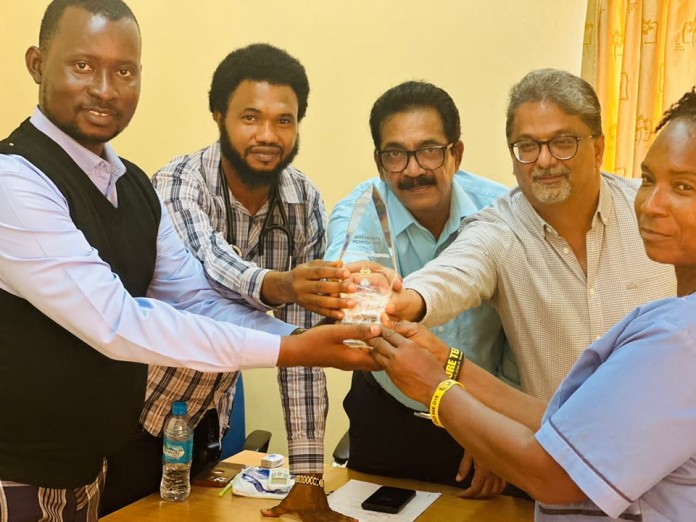 One of the vibrant Networks that have been tirelessly working towards ensuring that the health sector continues to provide the essential medical services required to save lives, through authentic reportage and awareness raising, the Health Reporters Network- Sierra Leone, that draws its membership from the print, electronic and online media operating in Sierra Leone, on the 23rd November 2022, awarded the Choithram Memorial Hospital as the Best Private Hospital for the year,2020, during a short but very impressive ceremony held within the precinct of the hospital situated on Hill Station in the West End of Freetown.

President of the Health Workers Network –Sierra Leone, Swaliho Vandi, in his address stated that one of their functions every year is to conduct surveys geared towards capturing the views and perceptions of ordinary people about various aspects of the country’s health sector.

“Through these surveys we sound the views of the general populace which most times inform our next line of action with regards our intervention as to what should be done to improve the health sector,” he stated furthering that in 2020 when they conducted a survey it happened that the Choithram Memorial Hospital turned out to be or emerged as the Best Private Hospital of 2020.

He said, however, because of the prevailing health situation in the country at that material time, with the prevalence of COVID-19, they were prevented from dishing or giving out awards to individuals and entities that emerged as winners in various categories.

The President of Health Reporters Network continued that in as much as the health situation has now seemingly return to normalcy they thought it fit that they should formally present awards to individuals and entities who at  that time emerged as winners.

“If we are all gathered here today this is the main purpose for doing so,” he said while presenting the plaque to the Assistant Deputy Matron of the Choithram Hospital, Christiana Tucker, who received it on behalf of the Management of the hospital.

In her remarks, the Assistant Deputy Matron, Christiana Tucker, said it is good to show appreciation for a work well done as such will help to motivate others to continue to do more. She said they are overwhelmed with the recognition and honour that are been bestowed on the hospital adding that they are looking forward to such gestures in the future.

She said that the period under review, when they emerged as a winner, was indeed a trying one, really not an easy one for them as medical personnel but they persevered and did their best.

She commended all their Directors and more especially the Medical Superintendent for holding the fort during those trying times maintaining that their resilience was a major source of inspiration for them to continue to do the job they have dedicated themselves to do.

“Let me assure all that we will continue to do our best by putting greater efforts to ensure that we reach the point we want to go,” she stated maintaining that by God’s grace many good things will be achieved.

On his part, Harish Agnani, Head of Choithram, used the opportunity to intimate all present that the hospital has recently undergone various renovations, which according to him, are necessary to be done from time to time with a view to improve standards and bring the entity up to speed.

He intimated how renovation work was done at the reception in order to accommodate more patients adding that the hospital is now fully digital, with less time spent on paper work or files. He also disclosed that the hospital now has a dialysis unit after they decided to secure one due to the limited ones available in the country and more especially because dialysis helps greatly in saving lives.

“We now have a well-stocked pharmacy where essential medicines could be procured and it was also recently rehabilitated,” he revealed. He further informed of the advanced arrangements they have reached for an MRI machine to be set up at the hospital expressing optimism that the deal will go through underscoring that having an MRI machine at the hospital will help people who are required to do tests overseas and the country to save the much needed foreign exchange, time and energy to be expended.

Dr. George added to the various developments that have transpired recently including improvements made for the easy movement of disabled patients and securing electronic beds even for the Labour Unit of the hospital. 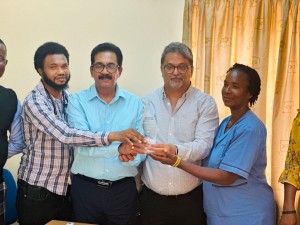