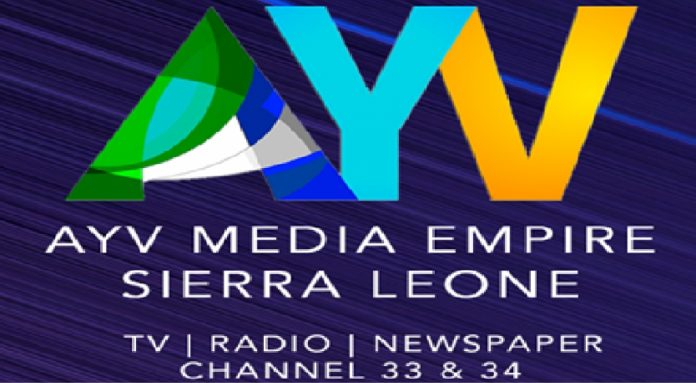 In a new development revealed in Freetown on 5 December 2019, AYV Media Empire announces that SES now hosts one of their television channels (33 -News). The platform will enable AYV reach over 180 million viewers across the world. Their fulltime hosting on SES, is in fulfilment of the CEO’s desire to project Sierra Leonean channels to every corner of the world, irrespective of the barriers.

AYV is the FIRST Sierra Leonean TV channel to be hosted on the world-leading satellite platform for global accessibility. To access the AYV News Channel, tune in to channel 101 from your Free to-air Multi TV Box.

These steps taken by AYV Media Empire to boom content from Sierra Leone to the world, is to generate a similar effect –  to bring the world to Sierra Leone through the power of communication.

“This is our Christmas gift to the people of our beautiful country, our constant viewers and partners. This will not be the end of the road for us; AYV Media Empire will continue to take the lead as the nation’s most reputable media brand.

AYV is here to stay and connect the world to Sierra Leone with accurate, balanced and credible information. We are aware of our responsibility to Sierra Leone.

And as always, stay viewing and look forward to something big and exciting from the AYV Media Empire in the coming year.

Let me seize this opportunity to wish the people of Sierra Leone a Merry Christmas and prosperous 2020”, CEO Amb. Anthony Navo Jnr.

SES is the world-leading satellite operator and the first to deliver a differentiated and scalable GEO-MEO offering worldwide, with over 50 satellites in Geostationary Earth Orbit (GEO) and 20 in Medium Earth Orbit (MEO).