Pavi Fort Construction Company Sierra Leone on the 27th May, 2020 donated the sum of fifty million Leones (Le50, 000,000) and PPEs items including 5,000 face mask, 100 gallons of hand sanitizer (1 gallon) worth a total of Le, 120,000,000 to the Government of Sierra Leone through the Emergency Operations Centre (EOC) in a bid to complement Government’s efforts geared towards combating COVID-19 in the country. The handing over ceremony took place at the Emergency Operations Centre (EOC) situated at SLFA compound in Kingtom, Freetown.

Presenting the items to the EOC, the Chief Executive Officer of Pavi Fort Construction Company Sierra Leone, Alimou Sanu Barrie, expressed appreciation to the Emergency Operations Centre (EOC) for the dogged efforts they have been putting towards the fight against the COVID-19 pandemic in the country, adding that as a construction company they decided to donate the sum of fifty million Leones (Le50, 000,000) as well as the PPEs items.

He said that resource mobilization is very key towards the fight against the COVID-19 underscoring how he believes that such a support from the company could be helpful especially at this decisive moment, adding that in totality the company donated Le, 120,000,000 which includes the Le. 50,000,000 cheque presented and the PPEs.

He admonished all to adhere to the preventive measures put out by the Government and health workers in order to curtail the spread of the virus in the country saying such will enhance the country’s potency to have an upper hand over COVID-19.

Receiving the donation on behalf of the Government, Technical Coordinator of the COVID-19 Response Team, Brigadier General Professor Foday Sahr, on behalf of the EOC National Coordinator Rtd, Brigadier Hassan Kellie Conteh extended thanks and appreciation to the Pavi Fort Construction Company Sierra Leone for what he said is a timely donation, adding that in the fight against COVID-19 nothing is too small.

He assured them that the cash donation, hand sanitizers & face masks will be used by the right beneficiaries and for the intended purposes.

He called on other institutions in the country to follow the foot step of Pavi Fort noting that the fight against COVID-19 needs collective action.

It could be recalled that Pavi Fort Construction Company has stood by the side of the Government of Sierra Leone during trying times citing August 14th 2017 when the mudslide occurred at Regent saying the company was among those that donated relief items which included five hundred bags of rice, Le25 million Leones and provided three excavators to clear the rubble saying it was really a timely response. 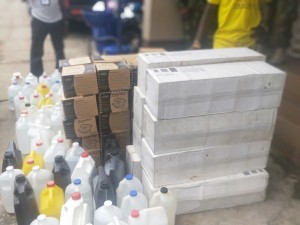