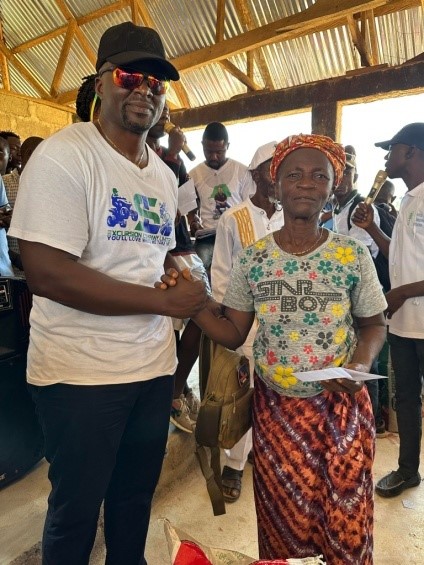 Establishing the fact that tourism could be a conduit or an engine for overall national development cannot be overemphasized when cognizance is taken of how the sector can mobilize resources, provide job opportunities and contribute immensely to rebranding the image of the country. Commendably, the Ministry of Tourism and Cultural Affairs and its related agency, the National Tourist Board, have recently made great efforts to boost the tourism sector in order to make it more attractive and contribute to national growth. However, there is still a long way to go to make the sector a real game changer and indeed the Government alone cannot accomplish that feat which therefore warrants the private sector to come onboard if only the benefits from the full potentials of tourism could be realized or felt.

One personality that has invested in the hospitality aspect of the sector with the avowed objective of boosting tourism is a wonderful, young, charismatic, ambitious and result oriented Sierra Leonean in the person of Vamba Wai Freeman who left this country for the US at 11 years of age and has now decided to give back to his country.

Based in California, USA, Vamba decided, in 2020, to set up a business entity in Sierra Leone geared towards rolling out activities and developing touristic sites that could be attractive to tourists who venture to travel to the country.

As a young entrepreneur, who owns the Sierra Leone Excursion Limited, a registered company situated on 18 Spur Loop in Freetown, that is also involved in car rentals, jet ski and linking intending tourists to various tour entities in the country, he is very keen to invest more in the sector with the main objective of bringing it up to standard.

One of the unforgettable events that this dynamic young man has so far organized was a beach fiesta, known as Cali Vibes, on the 7th January, 2023 at BawBaw beach in the West End of Freetown, an event that was supposed to take place at Sugarland Beach.

Lamentably, after this young man has spent millions of Leones to book the venue and do all the befitting fixes, orders came from above, probably the Ministries, that it will not be possible for the event to be staged there.

With barely 72 hours to the show, Vamba Freeman and associates have to change the venue to BawBaw Beach which, according to him was very frustrating. “Such is the kind of attitude put up by public officials that discourage potential investors to come to the country and meaningfully invest,” he lamented maintaining that the conducive environment should be provided to woo investors. He disclosed that despite the eleventh hour switch, Cali Vibes, turned out to be a success story and during the event a raffle draw was organized with one person emerging to win the grand prize, which was an Iphone 14 were as others won attractive prizes.

There was also a foam party which was so hot as participants were visibly seen enjoying themselves dancing in the bubbles that the foam machine was oozing. The foam machine is just one of the gadgets that Freeman procured to translate his dream of boosting tourism into reality. In sounding his candid opinions, Freeman intimated that there is much to do to bring the country’s beaches up to an appreciable standard bemoaning that comparatively, as it obtains in other countries, the beaches are not kept clean regularly here in Sierra Leone. “It will not be financially burdensome to part with few Leones to have young guys clean the beaches,” he suggested during an exclusive interview.

Vamba Freeman also disclosed that when, in the recent past, a fire disaster struck Borbu Village in Kailahun District rendering some of the residents homeless and impoverished, he decided to raise funds in the United States with the aim of helping the victims. He intimated that he succeeded in raising some funds which he used to give each of the family heads five hundred thousand Leones (Le500, 000), a bag of rice and some used clothes in a bid to give them solace.

With regards future plans, Vamba disclosed that he is keen to develop BawBaw beach, by bringing it up to standard with all the befitting facilities that will make it an attractive tourism destination. He also informed that he intends to also invest in the agricultural sector and plans to do so at Borbu Village, in Kailahun District.

According to him, entertainment and tourism go hand in hand further revealing how he is very passionate about promoting and fusing the two with the strong conviction that it will make the tourism sector more attracting adding that if the right stakeholders have harnessed that formula then the country will be miles ahead with regards an enhanced tourism sector as it obtains in Jamaica and other places.

Freeman also divulged that his company will embark on linking tourists from different parts of the universe to reputable tour companies operating in Sierra Leone that are capable of providing excellent tour services to various touristic sites in the country. “When I am away the activities of Sierra Leone Excursions Ltd will be undertaken by Abdulai Bah, Emmanuel Freeman and Joseph Lake,” he stated concluding that the attitude of a current Deputy Minister to deny them usage of Sugarland Beach after they have made all necessary arrangements, costing millions of Leones does not augur well for development to transpire as such will only contribute in discouraging potential investors from investing in the country adding that it is not in the best interest of development .