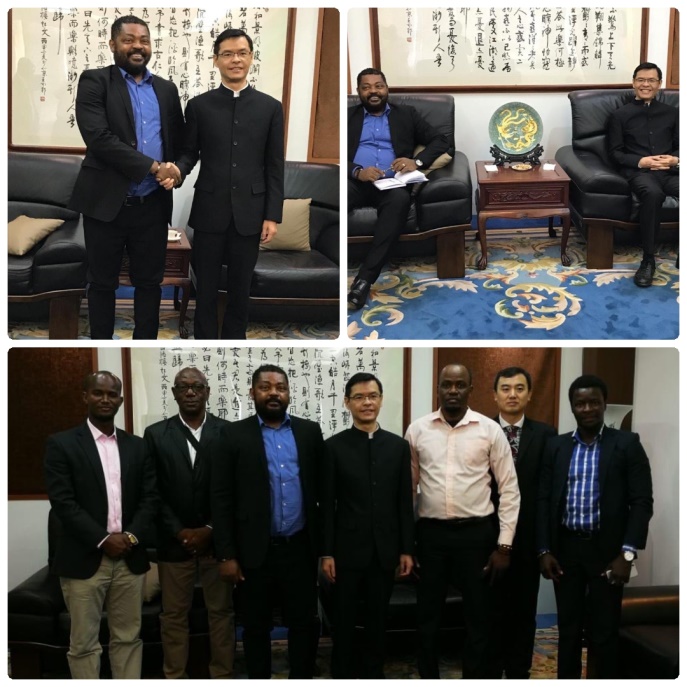 The Sierra Leone Association of Journalists (SLAJ) has expressed solidarity with the People’s Republic of China as the Asian giant battles to overcome the strange Corona Virus Disease.

During a courtesy call on the Chinese Ambassador in Sierra Leone, Ambassador Hu Zhanjiang, on Wednesday, 26th February, 2020, the President of SLAJ, Ahmed Sahid Nasralla, on behalf of its national membership and affiliate bodies, sympathized with the Chinese Government for the human and economic loss caused by the disease and assured the Ambassador of the media’s support in ensuring the right and objective information is put out there on China’s efforts in curtailing the outbreak.

“On behalf of our entire membership and affiliate bodies, let me express our solidarity with the Government and People of China during this difficult period. As a country we have been in a similar challenging situation with the Ebola outbreak in 2014 and 2015, so we know what it means,” said Nasralla.

He added: “China was among the first nations to come to our aid, and because of your intervention we now have the P3 laboratory, which has made Sierra Leone one of six countries in Africa to be able to test for the Corona Virus. So we equally stand with you during your own period of challenge.”

Nasralla encouraged Ambassador Hu to consider doing a public lecture at the SLAJ Secretariat to explain to journalists and interested members of the public on how China is dealing with the disease and share experiences.

In the area of collaboration, Nasralla acknowledged the support of the Chinese Government to the Sierra Leone media in general through trainings, scholarships, seminars and short visits to China. However, he appealed to the Ambassador for such opportunities to be channelled through SLAJ to ensure the actual journalists benefit.

“When you go through SLAJ, or assign a special quota for SLAJ, the right people benefit and they come back to impact the country’s media positively,” said Nasralla, making reference to journalist Matthew Kanu, who benefitted from a single Masters scholarship from the Chinese Embassy to SLAJ, and who came back after graduating and is now head of the Mass Communication Department at the University of Makeni (UNIMAK) in the North of Sierra Leone.

“So we look forward to a much closer relationship and cooperation with the Embassy in this regard,” Nasralla appealed.

Furthermore, the SLAJ President informed Ambassador Hu that the Association is in the process of acquiring land and is looking forward to any assistance from the Embassy in its effort to construct a Secretariat.

In his response, Ambassador Hu congratulated the SLAJ President on his election and acknowledged the role of the Association as a parent body of the media in providing leadership, and the important role the media is playing in nation building.

He noted that China and Sierra Leone have enjoyed a mutually beneficial relationship since 1971 and that they will never forget the role played by Sierra Leone in ensuring China secure a permanent seat at the United Nations.

He assured that the Embassy will strengthen its relationship with SLAJ and media friends but at the same time urged the Association’s leadership to ensure its membership while discharging their duties, do so with professionalism, particularly in reporting critical issues.

He welcomed the proposal for a public lecture and said he’s looking forward to it at the appropriate time.

On the issue of scholarships and trainings, Ambassador Hu said their policy calls for direct dealing with the Government of Sierra Leone, but assured SLAJ they will consider allocating one or two opportunities to the Association whenever they are available.

Regarding the appeal for support towards the construction of a Secretariat for SLAJ, he said their policy also do not allow them to provide such support to organisations. However, he said such request could be considered if it is channelled through the Government of Sierra Leone and the Government makes it a priority.

Meanwhile, Amb Hu assured that Sierra Leonean students and other nationals living in China are well taken care of during this crisis and that they are making success in the fight against the Corona virus and they are doing everything possible to ensure it does not become a pandemic.

He presented SLAJ with a projector, air condition, printer and a digital camera as gifts from the Embassy to support the running of the Association’s secretariat.